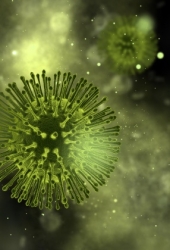 SARS and bird flu are both recent biosecurity issues. However, hundreds more viral (as in image) and other microbial threats exist, and research and education are the keys to minimizing the threats they present.

Several hundred potentially pathogenic biosecurity threats exist, all are of significant health concern. Governments and medical scientists are at the forefront of tackling biosecurity hazards, and EDF intends to play a part in reducing the threats presented by these emerging diseases.