A down-side of human globalization

The ‘encroachment’ by humans into formerly isolated regions where novel microbes and other parasites thrive may result not only in severe illness and death, but also in spreading infection widely throughout a population, creating an epidemic. 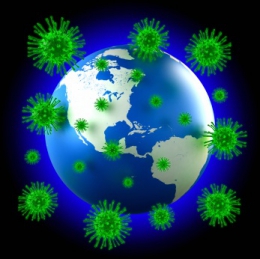 Microbes (seen here in this computer generated image of viral particles) are the original inhabitants of earth. Their small size, diversity, and ability to swiftly adapt to challenges in effect make them the dominant life-based force on the planet.

The ‘encroachment’ by humans into former isolated regions introduces biologically unprepared individuals (ie with localized ‘domestic’ immunities) into unfamiliar ecologies with novel microbes and other parasites, and balances. In short, often the visiting human is biologically and immunologically mismatched to the local area and its own evolved system.

Not surprisingly, then, many humans holidaying in far-flung areas get sick on the same food that the locals eat without getting sick. But while a ‘bad stomach’ may mean only mild inconvenience, many other encounters between traveling humans and remote ecosystems result in severe illness and death. Often these diseases are highly contagious, and before long the infection is carried widely throughout a population and that constitutes an epidemic. Many ‘exotic’ infections take time to show - days or weeks - and in that time the human traveler may be back home and harbouring the disease, and ready to spread it!

Another significant feature of our modern ability to access the further reaches of the world is the very different (yet obvious when you think about it) problem of the international trade in wildlife - such as people who buy exotic pets like fish (eg carp, catfish, and marine fish), amphibians (eg frogs, toads, and salamandas), reptiles (eg snakes, lizards, turtles, tortoises and crocodiles), unusual mammals (eg monkeys, wallabies, and kinkajus), birds (eg parrots, macaws, and finches) and wildlife products (eg ‘bushmeat’). All these can bring about animal-to-human disease. Such diseases are called ‘zoonotic diseases’ or ‘zoonoses’. 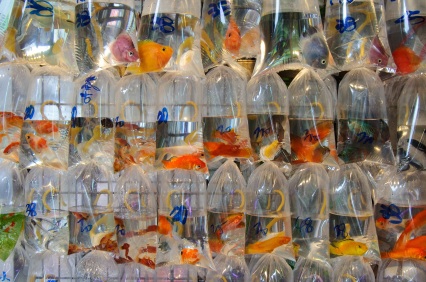 Enormous numbers of fish are kept as pets. Like other exotics pets, their captive lifespan is commonly short, and often abbreviated by microbes that have become infectious in the artificial environment. However, almost all fish harbour bugs that may cause disease in humans, and even a healthy single fish can transform a tank of clean water into an infectious soup within hours.

This ‘global access’ to wild animals and their products can see an exotic lizard caught from the wild and transported half way round the world and into someone’s living room within 24 hours! Contrary to what many people think, ‘quarantine’ only applies to certain animals—and not usually to fish, amphibians, and reptiles. Even if quarantine did apply to all animals, a typical quarantine period is 30 days, and many diseases would not be detected in that period.

Of course, responsible people may check out what known risks they face in a remote travel location first, then take as many precautions as possible. However, an individual buying an exotic pet for their family will almost certainly have no idea what genuine risks it poses, nor will the pet seller, nor will the local doctor! 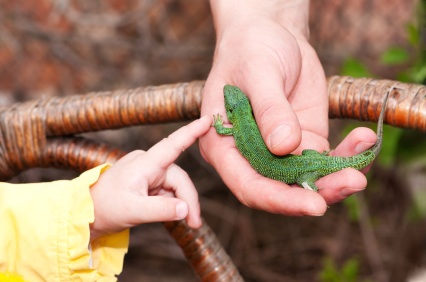 Exotic pets like lizards and fish usually undergo no quarantine, and quarantine would ‘miss’ most diseases anyway. Within 24 hours of capture, wild caught exotic animals can be in the home. Most or all will be harbouring potentially zoonotic bugs. While it is plausible for a human to avoid the risk of serious disease while traveling to an exotic location, it is difficult to avoid the risk of serious disease from an exotic pet in the home.