Tortoises, such as this large African leopard tortoise, are kept as house and garden ‘pets’ by many people. A single tortoise may, however, harbour a number of different potential pathogens, inadvertently bringing exotic disease into the domestic environment. Unsuited to captivity, stress causes these wild animals to become sick themselves further increasing the chances of shedding bugs into the home.

It has already been established that exotic pets (eg tropical fish, frogs, turtles, tortoises, snakes, lizards, birds, and some mammals) typically harbour a range of microbes (eg viruses, bacteria, fungi, prions, parasites), and that many of these microbes are potentially pathogenic to humans - ie ‘zoonotic’. Indeed, a single tortoise may contain numerous different kinds of bacteria, each with the potential to cause human illness or, in some cases, death.

Epidemiological surveys in the United States in the 1960s and 1970s showed that approximately 14% of all cases of human salmonellosis were associated with the keeping of pet terrapins. As a consequence of those studies the US Government formally described the trade in pet terrapins as a “significant” and “major” threat to public health, and banned the national trade in some 14 million animals in 1975. Canada followed suit and banned its national market in three million animals in 1976. Both bans remain intact today. Several other countries subsequently banned their pet terrapin trades. Since the bans on terrapin trades, the commercial pet industry has steadily promoted the keeping of other reptiles and amphibians as alternatives to pet terrapins. Accordingly, the market in these other exotic animals continues to rise rapidly. It is notable that while pet terrapins were major harbourers of salmonella bacteria, snakes and lizards are considered to be even more significant carriers of these pathogens. Importantly, the above considerations relate only to salmonella and associated infections, and thus form only a fraction of the diversity of potential pathogens known to be carried by exotic pets.

A survey of 1,410 human diseases found 61% to be of potentially zoonotic origin. And, 75% of global emerging human diseases are also zoonotic. The increasing encroachment of humans (for both recreational and professional reasons) into former isolated world regions has introduced people to more exotic places and exotic pathogens. The ‘introduction’ of humans to remote nature and infectious and infestive biological agents has been greatly exacerbated by and may now have been surpassed by the removal of wild animals from natural habitat and their relocation to the domestic environment via the exotic pet trade. 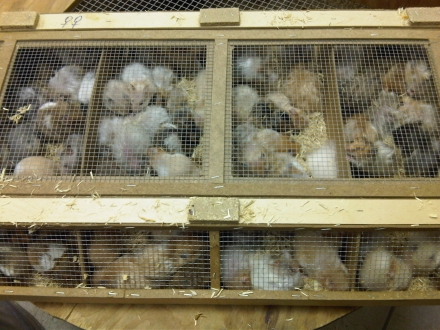 Cramped, stressful conditions are common ‘behind the scenes’ in the pet industry, and lead to entire groups of animals inadvertently harbouring and shedding microbes and disease once in the home. (Photo courtesy of People for the Ethical Treatment of Animals.)

Quarantine of animals at airports applies only to mammals and birds, and screening is restricted only to a handful of invaders such as rabies virus, bird flu, and Newcastle disease. Fish, amphibians and reptiles typically undergo no quarantine screening whatsoever, meaning that thousands of different known potentially debilitating and lethal microbes may be present in a single animal cargo, and this cargo may be transported from a remote region of the world and arrive in the domestic home within 24 hours of a wild animal being caught.

While much is known about the pathogenicity (infectivity/infestivity, resultant diseases, and medical science) of zoonotic agents, little is known about actual diversity and concentrations of potential pathogens associated with animals and environments at wildlife trade collection hubs. Also, little is known of the role of intermediary factors in the ‘captive’ environment such as induced close proximity of diverse wild-caught animals and human handlers at sites of animal concentration abroad and at home. The scientific presumption is that microbial presence at such hubs is great and the array of species prolific. However, data essential to formulate an assessment and valid evaluation of important factors are lacking.

EDF is conducting research into exotic pet-linked disease with a view of formulating guidelines for the prevention and control of zoonotic disease.